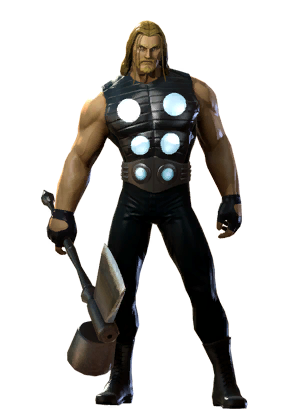 Thor was born in Asgard, one of the three sons of Odin and alongside his half-brothers Balder and Loki. The three formed the Warriors Three. He received Mjolnir from Odin, which allowed Asgard to win the thousand-years war against Jotunheim. After the victory, the three participated in a tournament alongside other Asgardian warriors. Thor defeated Loki but was in turn defeated by Balder. Soon afterwards, Loki betrayed Asgard and killed Balder, for what he was banished. Eons later, in 1939, Loki lead an attack on Asgard with a coalition army of Frost Giants and Nazi soldiers against Asgard. Thor fought against them, but was forced to witness Odin being murdered in front of him. His subsequent attack on the giants using Mjolnir's strength ended with the fall of Asgard.

The Dome, in Brussels was attempting to recreate the Super Soldier serum that created Captain America, with little luck. Eventually, they opted to go the bio-mechanical route instead and created a harness and power-belt that provided the wearer with the abilities of flight, super-strength and limited invulnerability. The test subject was Thorlief Goldmen. Upon testing the suit, he started raving how he was the actual God of Thunder, Thor. He was institutionalized as the delusions worsened.

Dr. Donald Blake was called in by Professor James Braddock - chief of the Dome - to assist Thorlief. After an MRI scan, Blake discovered Thor was not making things up. He was recalling memories. In this process, it was when Thor recognized Blake, as his brother Balder.

Braddock had his concerns about Thorliefs suitability, but was ultimately convinced to go on by Blake. The team working on the harness made several modications to the suit using inspiration from Thorliefs rantings. Adding weather control, and teleportation to the harness and belt. The only problem was how to include the power source. It was Thorlief himself, who suggested it be worked into a hammer.

When General Nick Fury contacted him about joining the Ultimates, Thor refused to work for the military-industrial complex that he detested. When the Hulk appeared in Manhattan, Thor refused to assist unless the President doubled the foreign aid budget. Not long after the Ultimates confronted the Hulk, the President relented and Thor appeared in time to save Captain America from Banner.

Following the battle, Thor became good friends with Tony Stark and Steve Rogers, pledging his support whenever lives were in danger. Soon thereafter, Thor was briefed on the Chitauri and sent to investigate a suspected Chitauri base in Micronesia. Finding the base abandoned and about to explode, they were saved by Iron Man's force field. Once a Chitauri fleet appeared in Arizona, Thor brought the survivors there, and alongside Iron Man provided air support against the Chitauri spacecraft until the Air Force arrived. Iron Man asked Thor to help him dispose of the Chitauri bomb that would obliterate the entire solar system, so Thor teleported it to the wastes of Nastrond, where its detonation caused only a small ripple in our space-time.

After the terrorist attack by the Brotherhood of Mutant Supremacy, Thor retrieved the dead with Iron Man. When Magneto attacked the Ultimates Thor threw Mjolnir at the Master of Magnetism, but Magneto managed to stop it an inch from his helmet and threw it back at Thor, sending him through a wall. Thor joined the Ultimates in attacking the X-Men later on, he defeated Storm, but was overpowered by Colossus.

Thor was with the Ultimates when they brought in Kraven the Hunter, although he refused Captain America's requests to catch Kraven or bring him back. He aided in reconstruction efforts in Bosnia when summoned following the Six's breakout. Thor defeated Electro during the climactic battle at the White House.

When the Kree attacked a Nevada base, Thor, Black Widow, Johnny Storm, and The Thing fought off the aliens. As he was idolized by Johnny Storm and Ben Grimm, he fraternized with them to the point of ordering Carol Danvers to prepare a Keg of Beer for after the battle.

Thor, alongside Nick Fury and the rest of the new Ultimates battled the Squadron Supreme when they destroyed the roof of the Baxter Building. After the battle Thor used his hammer to teleport the helicarrier with the team to the Supremeverse. There he engaged Hyperion in combat, but was defeated by the former's superior speed. However, Thor gained the upper hand against Hyperion felling him with a huge bolt of lightning then severely beating him with Mjolnir. He also knocked out Zarda as she attempts to stop him beating Hyperion

Thor was discovered talking to an Asgardian only he could see, and resigned from the Ultimates, protesting its likely involvement in foreign affairs, and the team's assumption that it was he who outed Banner as the Hulk. When an Italian demonstration against the European Defense Initiative's super-soldier program turned violent, Thor intervened. The Ultimates learned from the EDI's head scientist, Gunnar Golmen, Thorlief's brother, that the Norwegian government had chosen the Norse God of Thunder, Thor, as their national image and modeled a super soldier after him. They created a power-belt in the image of Thor's that granted the wearer unbelievable strength, durability and the power of flight. Their biggest success was the electric power battery in the form of Thor's hammer Mjolnir, which could ionize the environment, control the weather and allow the user to teleport. Gunnar alleged that Thor had stolen the technology that had given him his powers, and they tracked him to Norway to take him into custody. Thor told them that Gunnar was actually Loki, but the Ultimates and the EUI soldiers attacked him anyway. He shrugged off all their attacks, although his hair was burned off. It wasn't until Quicksilver managed to jump 50 feet into the air at Thor, and grab his belt, that Thor was brought to the ground. He was placed in Bruce Banner's cell in the Triskelion, where a vision of Gunnar/Loki taunted him about the existence of a traitor within the Ultimates' ranks.

The Russian government somehow got their hands on the suit and used it to aid, along with the Chinese government, in their invasion of America. The technology was fitted to one of their soldiers and was given the codename Perun, the Slavic God of Thunder, to fit the theme of the powers the suit provided. The shape of the hammer was altered, but retained all of it's abilities. He was also given a Sickle to match the Hammer to add to his Soviet symbolism. The Russian and Chinese governments created a team of super-powered individuals to lead the invasion, called the Liberators, and Perun was placed on this team. From his holding cell, Thor commented in grief that someone has stolen the lightning.

Thor remained in his cell until the invasion of America, at which time a bright light shined on him, and Thor vanished from his cell after he called for his father. Thor appeared standing beneath Loki, his hair and true Godlike powers restored, and wielding replicas of his belt, harness and Mjolnir (no longer requiring the use of the technology which simulated his original powers), challenging Loki to battle. During this battle he summoned an army of Asgardian warriors, which battled Loki's monster army. Finally he defeated Loki, who was sent back to Asgard.

He formed a romantic relationship with Valkyrie, who had mysteriously gained superhuman powers. He started speaking in a Shakespearean pattern, because with his godhood no longer in doubt he no longer felt he had to hide his true speaking patterns. He had a collection of weapons which were a gift from Odin forged by Ulik the troll. The ax/hammer weapon was among them. Thor aided the team when the Brotherhood of Mutants attacked their mansion. He later traveled to the Savage Land with the Ultimates to confront Magneto. He once again battled Magneto, but was quickly defeated an buried near the center of the Earth. Thor attempted to confront Magneto again, but Magneto used his powers to take his hammer from him and then left. Following this Thor begins using a sword. 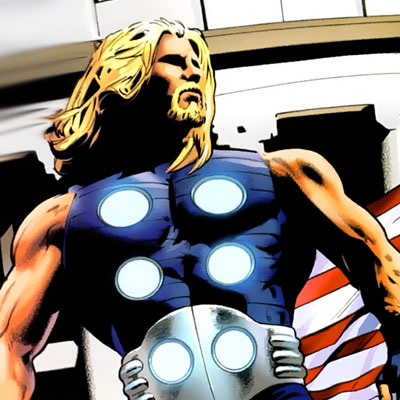 Thor possesses a variety of superhuman attributes. As a result of Loki's manipulation of reality, it seemed that Thor received his powers from his equipment, mainly his belt, and were not his own. Fortunately Odin restored his powers and Thor's power was returned to defeat Loki. It is unknown to what limits he relies on his tools and what powers are innate within him. Thor is considered one of the strongest beings in the Ultimate Universe and has been called the most powerful super-hero on the planet on different occasions and even by Nick Fury himself.

Thor possesses vast superhuman strength, the full limits of which aren't known . However, he is capable of lifting well in excess of 100 tons. His strength is such that when he struck the Hulk, his blows shook Manhattan, and after only three blows from Thor, he had damaged and beaten the Hulk to the point he broke his jaw, broke his ribs and punctured his lungs.

Thor is incredibly fast on his own two feet and can easily run faster than most vehicles.

He was able to effortlessly tag and knock away Quicksilver, who was going well in excess of 600 miles per hour and was only getting faster.

Thor's musculature produces considerably less fatigue toxins during physical activity than the musculature of an ordinary human. Much like his strength, the limits of his physical stamina are unknown.

The tissues of Thor's body are much harder and more resistant to injury than those of an ordinary human. As a result, he can withstand great impact forces, high caliber bullets, exposure to extremes of both temperature and pressure, falls from great heights, and powerful energy blasts without sustaining injury. Thor can exist in the vacuum of space without any aid.

Thor has demonstrated the ability to control the different aspects of weather while battling his opponents. He can create lightning so powerful he instantly took down over 6 alien space ships, and a single one was stated to be over 5 blocks wide.

Thor can use Mjolnir to instantly teleport himself across space and even an alien planetary level destroying bomb that weighs multiple tons to other dimensions such as Nastrond and come back just as easily. Thor can even create portals so large that the S.H.I.E.L.D. Helicarrier can traverse them to other Universes.

Thor's battle harness gives him the ability to fly without his hammer.

According to Volstagg, for being the last survivor of Asgard, Thor has become Valhalla, being able to see the ghosts of the defunct Gods and interact with them, but only he can see them, what probably makes people believe he's talking to himself.

» P.M. friendly.
» I'm a mirror poster in most cases. Unless it's late, or I'm multitasking a thousand and one things. I'm good with a thousand before I overload.
» Did you read my entire profile? Great job. You deserve a cookie.
» I'm not interested in being paired with your character.
» No furries, or herms please. Stay in your world, I'll stay in mine.
» What happens in role-play, stays in role-play. No drama for me.
» Best viewed in Google Chrome.
» Profile layout not by me. I made it pretty, though.