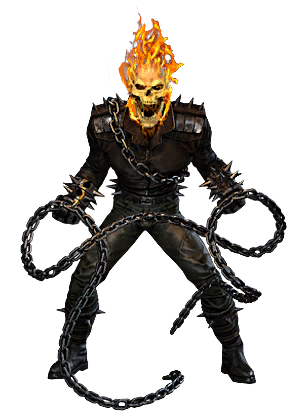 The Ghost Rider possesses superhuman strength sufficient to lift up to 25 tons. When Zarathos is in control, Ghost Rider is capable of lifting thousands of tonnes, able to trade blows with the strongest beings in Marvel, including Hulk, and Thor.

Johnny Blaze is highly resistant to the point of being basically immune to all types of earthly physical damage as he has taken blows from beings such as an enraged World War Hulk with no sign of pain or discomfort, had his entire skull destroyed and regenerated instantly without any discomfort. While the Ghost Rider is in control only divine weapons forged in heaven can cause discomfort or harm to the Ghost Rider. The Ghost Rider is capable of withstanding great impact forces, temperature and pressure extremes, powerful energy blasts, and falls from great heights without sustaining injury. As his bodily tissues have been transformed, leaving only a skeleton, most projectiles such as bullets simply pass through him or bounce off his bones. Ghost Rider's body is for all intents immune to physical injury, as he is evidently not able to feel pain and is able to survive with no apparent discomfort no matter how severe the injury.

Despite his invulnerability to conventional forms of injury, objects such as weapons forged in heaven by the arch-angel Zadkiel, can actually harm the Ghost Rider to a certain extent. However, if his being is damaged, the magical energies imbuing him allows the Ghost Rider or Johnny Blaze to instantly regenerate any and all damage done, even to the point of fully regenerating lost limbs in moments, and regenerating his skull after it was destroyed in seconds without any discomfort or any evident pain.

Ghost Rider possesses the ability to generate, control, and project mystical fire, or "hellfire" at will. Hellfire is an ethereal and supernatural flame that burns the soul of a person and can be used to burn their physical body. He can utilize this fire in various ways, including projecting it from his eyes, hands, mouth, or even channel it from his body into his weapons like his shotgun, form walls of hellfire, and even create a motorcycle completely out of hellfire. He can also unleash hellfire in omnidirectional explosions that are incredibly powerful, capable of bringing great pain to the Hulk.

Ghost Rider wields a mystical chain that is capable of growing in length, cutting through almost anything, and transforming into other weapons. He can also spew and project chains from his mouth or chest at will.

Ghost Rider possesses the supernatural ability to cause any individual see and feel every bit of pain they have ever inflicted on anyone in their entire lifetime for all eternity. It was once thought that this power only applied to those who looked into his eyes, however. When Zarathos took over Johnny Blazes body upon Mojo world, Ghost Rider Penance Stared the entire planet, and all it's inhabitants.

Johnny Blaze, a stunt daredevil, was the son of Barton Blaze and Naomi Kale, born in Waukegan, Illinois. He spent his early years in the Quentin Carnival where his parents starred in a stunt show with Craig "Crash" Simpson. Johnny's family had ended when his mother walked out on Barton and Johnny and took the family's remaining two children, Barbara and Danny, with her.

Losing his mother caused Johnny to repress many of his memories of her and his siblings. When his father died in a stunt, Johnny was adopted by Crash and Mona Simpson. The Simpsons helped Johnny by fabricating his past with the hope that it would be less painful than the truth. Now believing that his real mother was Clara Blaze, who had died, Johnny became an enthusiastic member of the Simpson clan, growing closer to their daughter, Roxanne.

The two soon became inseparable and, as they grew older their fondness for one another moved beyond familiar. Blaze would eventually join the Simpsons in their own traveling stunt show, the Crash Simpson Stunt Cycle Extravaganza.

Crash had become a real father figure in Blaze's eyes, and on learning of Crash's life-threatening cancer, Blaze turned to the occult. His studies led him to a spell which supposedly could summon Satan himself. Johnny was unaware that he had in fact summoned Mephisto. Desperate to save Crash, Blaze sold his soul to Mephisto in return for Crash's cancer to be cured. Crash Simpson's cancer was cured and Johnny believed he would live; however, Crash soon died after a stunt trying to jump over 22 cars.

Mephisto, when confronted by Blaze over Crash's death, declared that he had kept his end of the bargain. Johnny's exact words in the bargain had been for Crash to be spared the cancer which was killing him, not for him to live, though this had been Johnny's intent.

Bonded to the Rider, Johnny began to push away those he loved. (Roxanne, and his family.) Johnny took off, and attempted to carry on Crash's legacy, taking on bigger jumps, and risking his life. Eventually, Hollywood called, and Blaze was offered a part in a movie. Anxiously jumping into the role, and tired of chasing down demons in the night - Blaze eagerly agreed. Sadly, upon meeting the director, Zarathos peered into the mans soul, and saw that he'd run down a young woman with his car. Johnny's phone stopped ringing, after wind of what had happened reached the ears of the town. Johnny aimlessly wanders the country-side, seeking Vengeance for the innocent.

» P.M. Friendly
» I play Johnny Blaze young. He's near the start, pushing along his stunt career. He's been the Rider for a few years, but hasn't faced down any major threats.
» Faceclaim is Charlie Hunnam.
» Not a sexual character. There isn't enough Aloe Vera in the world to stop that cooter burn.
» Wanna date the flaming skull guy? Does he look like he's interested? Unless you're Roxanne, or some amazing goddess you won't have a chance. Roxanne still is rather unlikely- for safety reasons.
» Seriously. It's a flamethrower. Stop asking about it.
» Best viewed on Google Chrome